Did you hear about the TV weatherman who, despite his training and sparkling credentials, ran into a terrible unlucky streak?

He became something of a local joke. The town’s newspaper began keeping a record of his predictions. A year later, the paper reported that he’d been wrong almost three hundred times in a single year.

Unable to handle the pressure, the station manager fired him.

So the meteorologist moved far away and applied for another job as a TV weathermen. When he got to the question on the application about why he had left his last job, he wrote, “The climate didn’t agree with me.”

*rimshot*  Okay, I kind of guffawed at that one, lol.  I can honestly say the climate doesn’t agree with me where I live, either!

Have an awesome first weekend in August!

Well, we’re coming into the final leg of the season, I suppose, about 2/3 of the way through.  It feels like it’s been such a rough week for the garden.  I need to get out there to do some serious deadheading, too.  We’ve been having some really hot days, and there is something that has decided to make a buffet out of one of my pansy pots.  I. Am. Not. Pleased.  All the leaves are gone.  I suspect something wormy, although I can’t seem to find it.  I have a spray bottle coming this afternoon and I’ll be making a spray to try and tackle this critter.

Plus, several of the trees around the complex have orange tape on them.  I don’t know if that means those trees need to be treated, or cut down.  They started out okay this Spring, but then something happened and the leaf buds never opened.  I’m hoping it’s just some kind of tree illness, because I’d really hate to see them all have to be cut down.

The rest of the garden is still holding it’s own, although it is getting on the tired side.  We’re sliding into August now, and things will only get drier.  Which means I’m going to have to step up my watering game.

This is probably my favorite pot this week.  These Dianthus, aka “Pinks,” are holding their own while still providing a great spot of vibrant color.  They’ve been quietly sitting on the side there, waiting for their chance to shine. 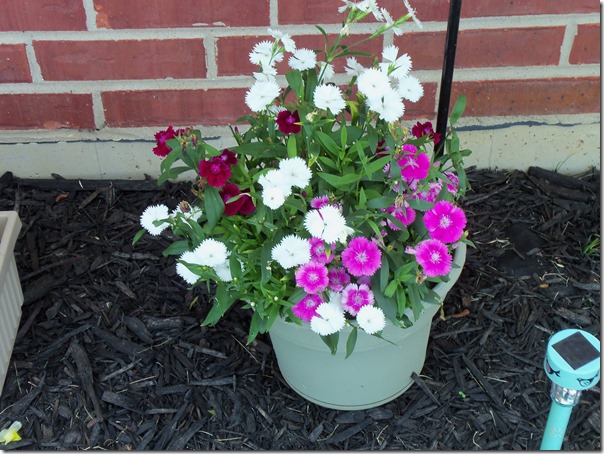 I had another chance to take a close up of one of the flowers from the potato vine.  The last one I posted was kind of washed out.  It’s a very delicate lavender/pinkish color.

So that’s my garden this week.  How’s yours doing?

Recently a routine police patrol parked outside a bar in a small farm town in Texas.

After last call the officer noticed a man leaving the bar so intoxicated that he could barely walk. The man stumbled around the parking lot for a few minutes, with the officer quietly observing. After what seemed an eternity in which he tried his keys on five different vehicles, the man managed to find his truck and trailer and fall into it.

He sat there for a few minutes as a number of other patrons left the bar and drove off. Finally, he got into the car and started the engine, switched the wipers on and off….it was a fine, dry summer night, flicked the blinkers on and off a couple of times, honked the horn and then switched on the lights.

He moved the vehicle forward a few inches, reversed a little and then remained still for a few more minutes as some more of the other patrons’ vehicles left. Finally, when his was the only car left in the parking lot, he pulled out and drove slowly down the road.

The police officer, having waited patiently all this time, now started up his patrol car, put on the flashing lights, promptly pulled the man over and administered a breathalyzer test. To his amazement, the breathalyzer indicated no evidence that the man had consumed any alcohol at all! Dumbfounded, the officer said, ‘I’ll have to ask you to accompany me to the police station.  This breathalyzer equipment must be broken.’

Thanks to my beloved for this one!  I’ve always loved this one.

Oh goodness, yes, definitely even!  Odd would drive me crazy!  That would be like … an odd number of eggs left in the carton.  *shudder*

Are You Even or Odd?
Work is Hard. Time for Blogthings!

Have a wonderful 10th birthday, sweetheart!

A fifteen-year-old came home with a Porsche and his parents began to yell and scream, “Where did you get that car?”

He calmly told them, “I bought it today.”

“With what money!?” demanded his parents. “We know what a Porsche costs.”

“Well,” said the boy, “this one cost me fifteen dollars.”

The parents began to yell even louder. “Who would sell a car like that for fifteen dollars!?” they asked.

“It was the lady up the street,” said the boy. “Don’t know her name — they just moved in. She saw me ride past on my bike and asked me if I wanted to buy a Porsche for fifteen dollars.”

“Oh my goodness!” moaned the mother, “she must be a child abuser. Who knows what she will do next? John, you go right up there and see what’s going on.”

So the boy’s father walked up the street to the house where the lady lived and found her out in the yard calmly planting flowers. He introduced himself as the father of the boy to whom she has sold a Porsche for fifteen dollars and demanded to know why she did it.

“Well,” she said, “this morning I got a phone call from my husband. I thought he was on a business trip, but I learned from a friend he has run off to Hawaii with his secretary and really doesn’t intend to come back. He claimed he was stranded and asked me to sell his new Porsche and send him the money. So I did.”

BAHAHAhahaha!  I totally didn’t see that one coming!

Have a great weekend!

My daughter is a big-time sleepyhead in the mornings.  She absolutely hates to get up.  I think she probably gets that from her mother.  *ahem*  This morning I went to give her the usual wake-up kiss, and I said, “Don’t go back to sleep!  You don’t want to miss your last day as a nine year old!”

And I realized … after today I will no longer have a child in the single-digits age bracket.

That’s a bigger milestone for me as a mother than is known to most people.

And the bittersweet of it made me kind of sad, in a way.  It’s an ending, a closure.  There are no more babies, and my baby will be 10, a whole decade!  Double-digits from here on out, and tomorrow she will be 21, because I will blink and time will have zipped by that fast.

Goodbye, single-digit ages.  I will miss you, terribly.  It’s been more joyful than anyone can know.

Have you ever been burned before?  I mean like the kitchen burns, the kind you get when you’re cooking.  Not major burns, but still painful.  That happened to me night before last.  I was making soap, and afterward was wiping off the stove.  I picked up the grate to wipe under it and it was cool.  Then I accidently bumped the burner disk – that ceramic disk that distributes the flames on a gas stove, and out of reflex I grabbed it to keep it from falling.  It was in my mind that the grate over it had been cool to the touch and I just wasn’t thinking.  Of course, immediate blisters.  “Oh, that’s gonna leave a mark!” I said out loud when it happened.

I ran my fingers under cold water right away, but I was busy in the kitchen and debated going to get band-aids, knowing they’d come off quickly while I was washing dishes.  For some reason – probably because I’d been making soap earlier, the story of the one they call “The father of aromatherapy” went though my head, and I grabbed my bottle of lavender essential oil.  I sprinkled several drops over the blisters and then held an ice cube over them for a while, like I always do when I get a burn like that.  After that, band-aids.  I wasn’t sure what would happen, if anything.  I mean, you hear things, you read things, and you think, “wow, that’s amazing!”  But you have doubts about how true that story is, if it could be an exaggeration or even made up.  My brother almost lost his hand to a severe burn when I was a girl, and I’ve always known to ice a burn then let it breathe.  But to put an essential oil on it?  Well, I confess I was dubious, as much as I believe in the healing potentials of essential oils.

The next morning, about 12 hours later, when I got up, I took the band-aids off.  The blisters were gone!  The skin was still white where they’d been, but there was no pain and no bubbling in the skin like what usually happens with a blister.  A few hours after that, and even the white part of the skin where the blisters had been was gone too and you couldn’t even tell I’d been burned there less than 24 hours earlier.  I know I generally get over things fairly quickly, but a burn blister is always at least 2-4 days.  The blister swells, then bursts, then you get that hard skin, it’s yucky.  But completely healed in less than a day with none of the post-effects?  Color me lavender, and impressed.  You can be sure I will always have some of that stuff on hand.

June must be the month of love, as it has been paired with the flower of passion, the rose. Roses have many significant meanings depending on their color and the number of flowers in the bouquet. June birthdays are also known for their passion, making June and the rose a perfect match.

Scripture: Worship the Lord in the beauty of holiness. Psalm 96:9 KJV

Who comes with summer to this earth,

And owes to June her hour of birth,

With ring of agate on her hand